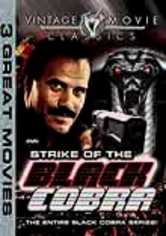 1987 NR 4h 32m DVD
It's a triple dose of Fred "The Hammer" Williamson as the action star portrays crime-fighting undercover cop Robert Malone. In Black Cobra, Malone protects a female photographer (Eva Grimaldi) from some psychopathic bikers. In Black Cobra 2, he takes on Iranian terrorist oilmen and rescues more hostages. And in Black Cobra 3, "The Hammer" is once again in fine fighting trim as he makes a whole new set of baddies pay dearly for usurping the law.