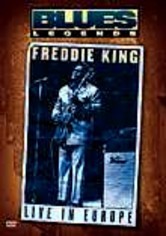 2003 NR 1h 7m DVD
Influential blues guitarist and singer Freddie King performs on various stages throughout the European continent in this concert film, which captures a series of King's performances in the years 1973 and 1974, shortly before his passing. Playing everything from old standards to groundbreaking original pieces, King gives his all to songs such as "Sweet Home Chicago," "Blues Band Shuffle," "Woman Across the River" and more.