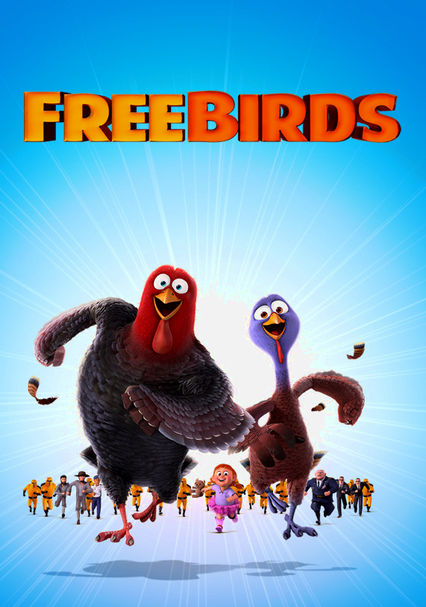 2013 PG 1h 31m Blu-ray / DVD
When Reggie and Jake -- two adversarial turkeys -- find a time machine, they take an adventure-laden trip back to the past to try to change history. First order of business: taking turkey off the traditional Thanksgiving menu.

Parents need to know that Free Birds is an animated time-travel adventure that tells the story of the first Thanksgiving from the perspective of the turkeys desperate to keep the Pilgrims and Native Americans from leading to the annual destruction of their kind. There's some gun violence and an important character is killed. The language includes some insults like "dumb" and "coward," plus there's some borderline insensitive depictions of turkeys as similar to Native Americans. Plus, there's a romantic subplot and glimpses of a telenovela where a man is always surrounded by beautiful women. Families may enjoy discussing the history of Thanksgiving.

Reggie watches a telenovela about a loner who is always surrounded by beautiful women. Reggie falls almost immediately in love with Jenny, whose turkey body is a human-like hourglass figure with large breasts. They flirt and eventually kiss.

The Secret Service hold guns. The Pilgrims hunt with guns. Myles Standish uses fire and guns to destroy the turkey habitat. The turkeys fight back.

There's a message of collaboration, teamwork, leadership, and working toward the greater good. However there's also a borderline insensitive depiction of wild turkeys as being a lot like Native Americans.

Some of the pizza boxes say "Chuck-E-Cheese"; there's an overt reference to Angry Birds, Old Navy, and Auntie Anne's.