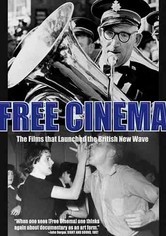 1952 NR 3 discs
Carefully selected by the British Film Institute, this collection of 16 short and feature films spanning the years 1952 to 1963 captures the essence of the British Free Cinema movement. Directors include Lindsay Anderson, Karel Reisz and Robert Vas. Among the titles are "O Dreamland," "Momma Don't Allow," "Together," "Wakefield Express," "Nice Time," "The Singing Street," "Every Day Except Christmas," "Refuge England," "Gala Day" and more.