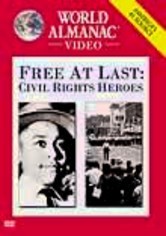 2004 NR 1h 35m DVD
Witness the amazing, courageous stories of Emmett Till, Medgar Evers, The Birmingham Four, Viola Liuzzo and more. The story of the Civil Rights movement in the United States is usually told through the acts of such charismatic leaders as Martin Luther King Jr., but often the struggle played out in the small acts of peaceful defiance performed by individuals. Hear the stories of those heroic people who helped stir a nation and forge a new path.