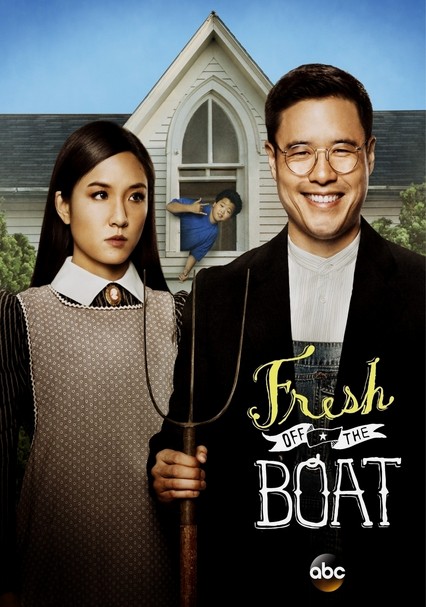 2015 NR 1 season
Eddie Huang and his Taiwanese family are on the move from D.C. to Orlando so his father can open a rustic steakhouse. While Dad wants his "American Dream," Mom suffers culture shock in this new city. Eddie and his brothers just want to fit in.

It's the 1990s, and the Huangs are on the move from their mostly Chinese D.C. neighborhood to caucasian Orlando, Florida, where misadventures and culture shock await hip-hop-loving 12-year-old Eddie and his hopeful immigrant family.

Parents need to know that Fresh Off the Boat is a family sitcom about a Chinese-American family and is based on the bestselling memoir by restaurateur Eddie Huang. In a light and often sardonically sweet manner, the show tackles many challenging subjects: race, class, and ethnicity. Characters react in unpleasant ways to various aspects of the Huangs' life; ethnic slurs such as "chink" are used. Parents may want to watch with children to discuss sensitive topics. The young actor playing the fictionalized Huang, who fancies himself a tough guy like his heroes Tupac and Notorious B.I.G., says things such as "What the hell?" and "Shut up!" to his brothers in front of his parents (who scold him).

Women are occasionally shown in revealing outfits; references to dating. Some discussion of sexuality among Eddie and his friends.

Rarely "bitch" and "slut," lots of "hell," the occasional "dammit," and ethnic slurs such as "chink."

Race, class, education, and other potentially tricky topics are addressed, often in a joking manner, but the overall theme is positive and hopeful. Characters struggle to find their identities, and there's a strong family dynamic throughout. Parents may have plenty to discuss with kids after an episode.