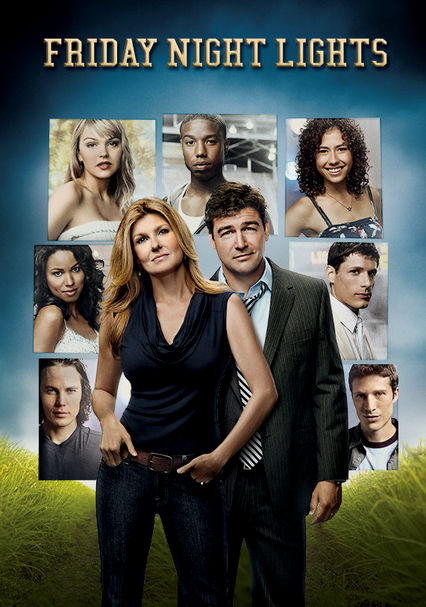 2006 TV-PG 4 seasons
Football is god in small-town Texas, where the Dillon High School Panthers seem to be a shoo-in for the state championship for the first time in 15 years -- and the pressure to win is enormous for the team's new coach, Eric Taylor.

The team's future hangs in the balance as coach Eric Taylor prepares to leave Dillon for a college-level coaching job at Texas Methodist University. Unchanged in her thinking, his pregnant wife, Tami, holds firm to her decision to stay behind.

In the third season of this critically acclaimed series, former star running back Brian "Smash" Williams works to recover from a serious knee injury, while coach Eric Taylor tries his best to hold the squad together and grab gridiron glory.

Big dreams mean big pressure for football coach Eric Taylor and his Panthers in a town that lives and breathes by the team's record. On top of that, Taylor must also help his players through personal dramas and manage his own life off the field.

In Season 5 of this critically acclaimed drama, star quarterback Vince tries to steer clear of trouble, Luke considers transferring to a prestigious private school and Coach Taylor struggles to balance his job with his responsibilities at home.

Parents need to know that this sports drama -- like the movie it's based on -- centers on the coach and players of an elite high school football team in small-town Texas. There's constant tension between the community's desire to win games and the coach's goal of helping his players understand the inner strength they need to truly be winners. Racial tensions, underage drinking, and sexual tension are prevalent, and some of the football scenes can get pretty intense. Other mature issues include infidelity, abusive relationships, divorce, going to war, and more.

Some hugging, kissing, and making out, as well as strong innuendo. Teens are seen in bed together. One high school kid sleeps with his 30-something neighbor and also his best friend's girlfriend. A girl cheats on her boyfriend. Some lingerie/underwear shots. Dating, relationships, and sex (including virginity) are discussed.

The games are rough, and some of the injuries are very serious. Some arguing, pushing, and shoving between feuding teammates. One storyline deals with sexual assault, another with murder. Some abusive relationships.

There's a strong focus on playing from the heart as well as playing to win. Respect for teammates, family, and community are stressed. Racial tension is also a theme here. Prayers are both seen and heard throughout show.

Restaurant logos, such as Applebee's, are distantly visible. Sports drink bottles are visible, but no logos.

Underage drinking (often with the intention of getting drunk); one player is hung over on several occasions.