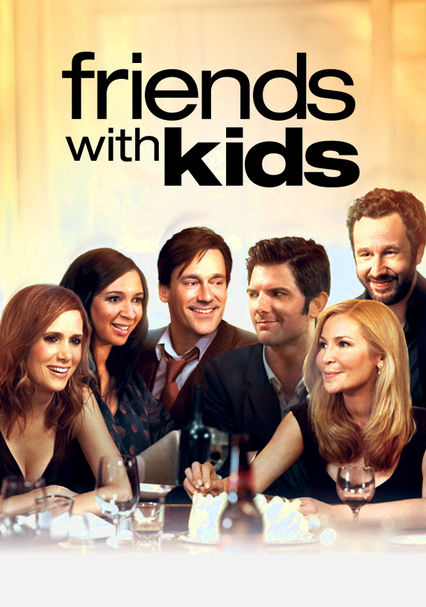 2011 R 1h 47m Blu-ray / DVD
Best friends Jason and Julie decide that the way to have kids without sacrificing their social lives or careers is to raise a child together platonically. But romance and other complications interfere with their perfect plan.

Parents need to know that Friends with Kids is a dramedy about adult relationships and having and raising children -- themes that may not particularly appeal to younger viewers, despite a cast filled with Bridesmaids veterans like Kristen Wiig, Maya Rudolph, and Jon Hamm. Characters frankly assess the challenges of child-rearing, making the movie honest to a degree that young kids won't probably be able to process or understand with nuance. There are also open, graphic discussions about sex (what it's like pre- and post-baby, what happens to the body and libido, etc.), and a few scenes that show sex/implied sex (no sensitive nudity). Marriages are depicted in various stages of tension and discord; relationships are fuzzy and confusing. Characters swear frequently and colorfully ("f--k," "s--t," etc.) and do plenty of social/a bit more than social drinking.

Loud arguments sometimes take place in public, humiliating many of the people involved.

Somewhat obscured by the usual romcom dance -- girl likes guy, guy loses girl -- that can sometimes mislead younger viewers into thinking that every romance worth having requires a lot of drama is the message that wonderful relationships can come from deep and abiding friendships. Also, it's nice to be able to lean on our friends for help, and kids don't need to damage friendships -- they just change the tenor of it.

Plenty of drinking by adults, mostly social in nature (at restaurants, dinners, bars, etc.) but sometimes to excess. One character in particular is suggested to be especially fond of/dependent on her wine.