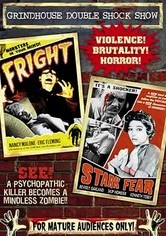 1956 NR 2h 42m DVD
Spiritual possession, mental illness and psychological torture are in ample supply in this grindhouse double bill from filmmakers W. Lee Wilder and Ned Hockman, featuring Nancy Malone and Beverly Garland. In Fright, a psychiatrist is drawn into a relationship with a patient who believes she's the reincarnation of a 19th-century baroness. In Stark Fear, an abused woman sets out to unravel her husband's past and makes a shocking discovery.