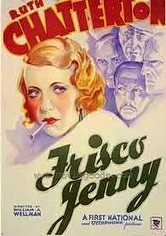 1932 NR 2h 24m DVD
Two fallen women are driven to desperate acts to protect the men they love in this pair of provocative Hollywood dramas from the 1930s. First, Frisco Jenny (Ruth Chatterton) rises to become the city's top madam -- but when the son she gave up for adoption faces a threat to his life, she takes dramatic action. Then, Midnight Mary (Loretta Young) discusses her ill-fated past while on trial for murdering the man who wanted her boyfriend dead.