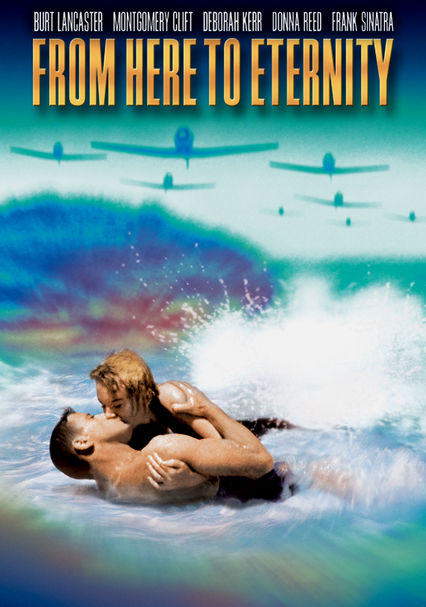 1953 NR 1h 58m Blu-ray / DVD
This gripping adaptation of James Jones's novel about Army life in Hawaii in the idyllic days just before Dec. 7, 1941, follows the stories of three soldiers and the women who love them.

Parents need to know that by modern standards of sexuality, language, and violence, this classic film would not be considered objectionable, however, it still contains highly intense situations, including the mistreatment and death of some of its strongest and most likeable characters. There are multiple scenes of bullying, fist fights, and knife fights, though none is bloody or gory. Even the Japanese attack on Pearl Harbor is only moderately violent. Airplanes strafe the military compound in wide shots; rifles, machine guns and artillery are used to fight back, but very little in the way of "hits" or aftermath is seen. Sexuality is limited to passionate kissing, embracing and references to adulterous behavior. There is a great deal of drinking, drunkenness, and smoking throughout; in almost all instances it is seen as acceptable behavior given the time (1941) and place (a military compound in Hawaii).

Though this 1953 film contains perhaps the most famous screen kiss of all time -¿ Burt Lancaster and Deborah Kerr in a passionate embrace on a sandy beach as the tide rolls over them- ¿ it's actually tame by today's standards. The kiss lasts a few seconds and then the camera cuts away. Two intensely romantic relationships build strongly and result in scenes of ardent kissing. Everything else, including adultery, is hinted at or discussed, but not seen.

Several intense fist fights, a struggle using a knife and a broken bottle, and a second knife fight during which one of the combatants is killed off camera. Another character dies after a severe off-camera beating. Given the scope of the action, relatively little blood is spilled and severe injuries are not shown. Scenes, including some newsreel footage, of the Japanese attack on Pearl Harbor is limited in scope and takes up only the last 10 minutes of the film: machine guns and rifles are fired; airplanes strafe the military compound, bombs drop, and some bodies fall to the ground.

There are a number of ethnic slurs: "wop" and "Japs." No swearing or obscenities.

This film sets high standards for loyalty, courage, and patriotism. The people who live up to those standards are deemed heroic and noble.

Multiple scenes of drinking and drunkenness. The soldiers drink heavily while not on duty and most of the major characters bond while inebriated. Cigarette smoking is pervasive.