From Justin to Kelly: The Tale of Two American Idols 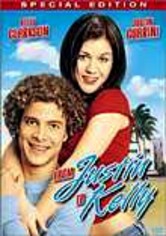 From Justin to Kelly: The Tale of Two American Idols

2003 PG 1h 21m DVD
Kelly Clarkson and Justin Guarini are back -- this time, starring in a Miami musical infused with lots of romance. It's spring break, and two groups of friends head south for some much-needed R&R. Romance blooms between the two "American Idol" alums (who aren't playing themselves, but characters similar to them), but is it true love? This video includes the original theatrical version and an extended version with two new dance numbers.

Parents need to know that this movie has some mild swearing and sexual references. Kelly objects when Justin and his friends organize a whipped cream bikini contest. Some characters talk about "party" behavior (in mild terms), but the behavior they exhibit would impress even Annette and Frankie. Justin and Kelly share just one kiss. Characters drink in a bar. It is worthwhile to note that there are inter-racial friendships and romances, positively portrayed.