From Normandy to Berlin 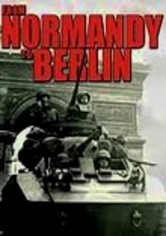 From Normandy to Berlin

2007 NR 2 discs
This documentary retraces some of the Allied army's most shining moments near the end of World War II, from D-Day to the final collapse of the Nazi empire. Witness the Allied landings on the beach at Normandy during Operation Overlord in June 1944; the triumphant Allied army's march through the streets of Paris less than 100 days later; and other key Allied victories such as the Battle of the Bulge and the Battle of Remagen.