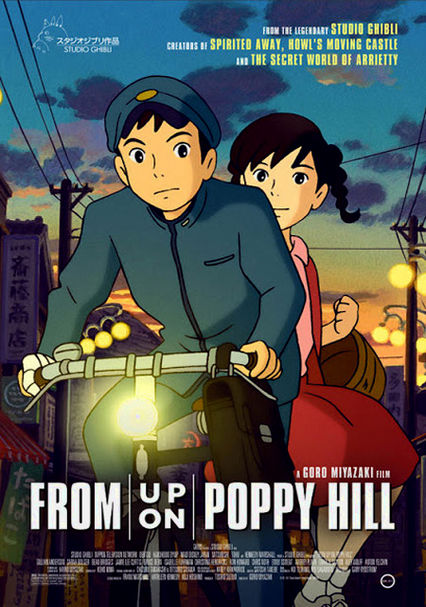 2011 PG 1h 31m Blu-ray / DVD
As Japan prepares to host the Olympics, Shun, a school reporter, fights to save a clubhouse from progress-minded authorities. He gets unexpected help from Umi, a classmate who's fallen in love with him.

Parents need to know that From up on Poppy Hill, which was directed by Goro Miyazaki (son of legendary filmmaker Hayao Miyazaki), doesn't have much in the way of iffy content, but the coming-of-age plot, period setting, and some of the themes might be too mature for younger kids to understand or appreciate. Set right before the 1964 Tokyo Olympics, the movie centers on a teenage protagonist whose mother is abroad, leaving her to take care of her family-owned boarding house, her two younger siblings, and her school obligations. There's a strong romantic plot point (including hand holding and a declaration of love), as well as intrigue about a father's infidelity, suggestions of possibly incestuous feelings, and the circumstances of how two men died. The movie's teens are admirable for banding together to save their school's historical clubhouse from demolition. Some drinking and incidental smoking; language includes mild insults.

High schoolers Umi and Shun share an instant connection and flirt, ride a bicycle together, touch hands, admit they have feelings for each other, and eventually even declare their love (which has a shadow cast upon it when it's suggested they may share a familial connection). Whenever they're flirting, their cheeks get rosy and flushed. Miki jokes about inviting "really cute boys" to dinner. Various teens blush in the presence of the opposite sex.

Discussion of how two fathers died during the Korean War. A boy purposely jumps out of a window and into a pool of water. He ends up hurting his hand.

The movie encourages friendship, commitment, and sticking up for what you believe in. First love is portrayed as momentous and full of awkward and sweet little moments. Despite their youth, the teens are able to rally together and appeal to the government about their beloved clubhouse.

Adult women share a bottle of alcohol (which Umi, 16 or 17, is allowed to take part in). They don't allow Sora (who's probably around 14) to have any. Some images of smoking.