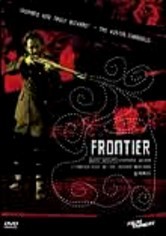 2003 NR 1h 22m DVD
Indie film veteran Wiley Wiggins stars in this offbeat comedy based on a novel by writer Mulnar Tysthat. With the Kornsthog Revolution just winding down, two rebels without a cause take up the mission to conquer and modernize the newly formed state's wildest territories. But with no formal war to back their newly devised cause, the two wind up turning against each other and, more important, collapsing their own infrastructure.