Frost: Portrait of a Vampire 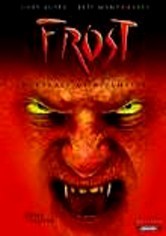 Frost: Portrait of a Vampire

2001 R 1h 32m DVD
When the U.S. government doesn't want to deal with cases that are too messy for the CIA and the FBI, they hire outlaws such as Jack Frost and Nat. But on their final assignment, a vampire attacks Jack, and everyone thinks he's dead. Nat seeks revenge and discovers Jack alive -- but profoundly, mysteriously changed. In the end, the two former partners face off against each other. Gary Busey stars.