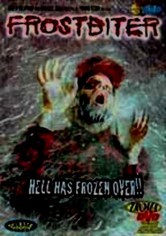 1996 R 1h 45m DVD
Two hapless hunters inadvertently release a hellish beast in this chilling horror flick. Trapped by "the Guardian" (Mike Missler), a creature known as the Wendig has been frozen in a mystic circle deep in the Michigan woods for many years. But when Gary (Ron Asheton) and his hunting partner accidentally disturb the area, the predator goes on a rampage. Now, they must join forces with a woman (Lori Baker) who has the power to destroy the monster.