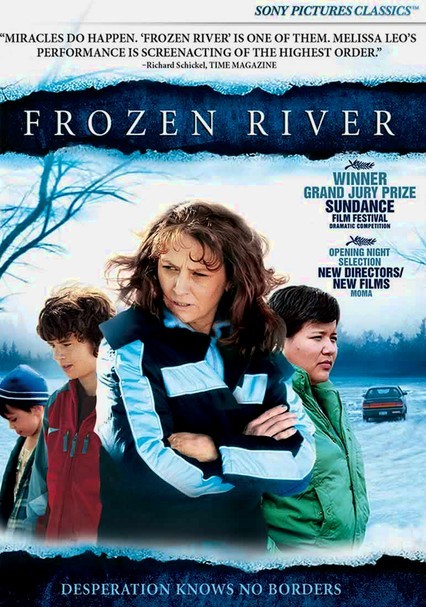 2008 R 1h 37m Blu-ray / DVD
On a Mohawk reservation on the Canadian border, Ray Eddy teams with widowed tribe member Lila Littlewolf to smuggle illegal immigrants into the United States. Though the work provides the women with much-needed money, each trip puts them in peril.

Parents need to know that this film, which earned actress Melissa Leo an Oscar nomination for Best Actress as well as a nomination for Best Original Screenplay, is a serious, strong, and well-made drama loaded with topics worthy of serious discussion, as well as some harsh language. Parents also need to know that the film is not shy about depicting illegal activity and working-class poverty.

Brief images of people stripped down to their underwear. Scantily-clad dancers in a strip club, fully-clothed, writhe.

Threats are made with guns. Fighting and scuffling. Discussion of suicide bombing. An infant is, unknowingly, placed in mortal danger. A fire consumes a home. A blowtorch is brandished in anger.

Some profanity, including "bulls--t," "goddamn," multiple variatons on 'f--k," and more. Ethnic slurs and racial language, such as "Paki" and more.

The film's entire plot revolves around a number of ethical questions: What are national borders? What makes the law? What does it say when a person can make more money breaking the law than they could in weeks of "honest" labor? What makes immigration "legal" or "Illegal," and what does it say that people are so desperate to come to the United States that they'll endure any hardship to get there? There are also discussions of the differences between "whites" and Native Americans. There's also depiction and discussion of gambling addiction.

Some brands mentioned, including Hot Wheels, Pringles, and more.