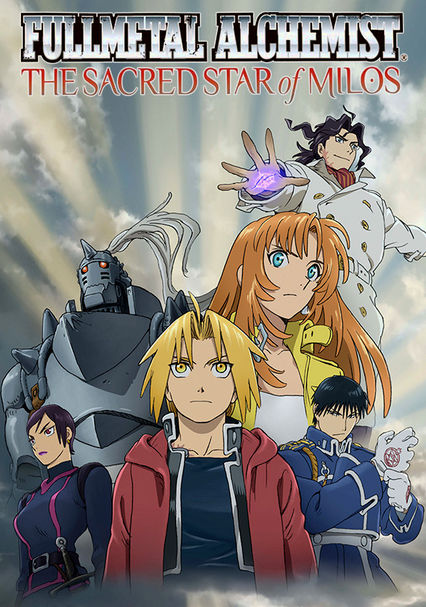 2011 TV-14 1h 50m DVD
In this sequel to the anime epic Fullmetal Alchemist, the Elric brothers travel to the land of Milos, where people are rebelling against their masters. The brothers soon become involved in the cause, joining forces with a young alchemist named Julia.

Parents need to know that Fullmetal Alchemist: The Sacred Star of Milos is a fairly violent movie that follows an earlier Fullmetal Alchemist movie and the successful Japanese TV series. Expect heavy fantasy violence, including fighting, shooting, and stabbing -- plus gushing blood, death, and dying. A character also tears at a woman's clothes, though not for a sexual purpose. The movie is available in both Japanese and dubbed into English; subtitles in the Japanese version include words like "bastard," "hell," and "crap." Teen fans of this series will be excited, while others are likely to be a little confused by the movie's complicated plot and lack of character introduction.

A bad guy tears at a woman's clothes to get to a tattoo that's on the side of her waist. Minor flirting.

Lots of anime fighting, shooting, stabbing, blood, death, and dying. One character peels off his flesh (which turns out to have been stolen from someone else). Characters vomit blood in one scene. Some of the fights involve alchemy, in which certain elements are changed into other elements (air is turned into steel blades, etc.) Viewers see explosions and fire, as families are driven out of their homes. One small girl witnesses shootings.

In the non-dubbed version of the movie, English subtitles include the words "bastard," "crap," and "hell."

The movie's main theme seems to be one of banding together to triumph over the odds, as the villagers rise above their oppressors. Some characters choose questionable methods, but the main heroes always try to make sure everyone stays on the right path.