Funk You Very Much 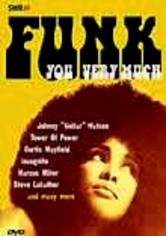 Funk You Very Much

2006 NR 1h 25m DVD
Some of the biggest names in pop, R&B, soul, blues and jazz gather for a celebration of funk, filmed live as part of the Ohne Filter concert series. Tracks include "Funky Broadway" by Terence Trent D'Arby, "Move On Up" by Curtis Mayfield, "A Real Mother for Ya (Encore)" by Johnny "Guitar" Watson, "Biyo Rhythm" by Tony Joe White, "I Got That Feeling" by Albert Collins and "Diggin' on James Brown" by Tower of Power.