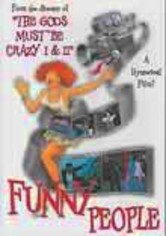 2004 NR 1h 28m DVD
In the tradition of "Candid Camera," this South African prank show from the 1970s directed by Jamie Uys, the filmmaker for The Gods Must be Crazy and its sequel, features unsuspecting people caught in a variety of funny or ridiculous situations. Segments include a talking mailbox, uncooperative automatic doors thwarting men trying to move a large piece of furniture, a hilarious assembly line at a cake factory and much more.