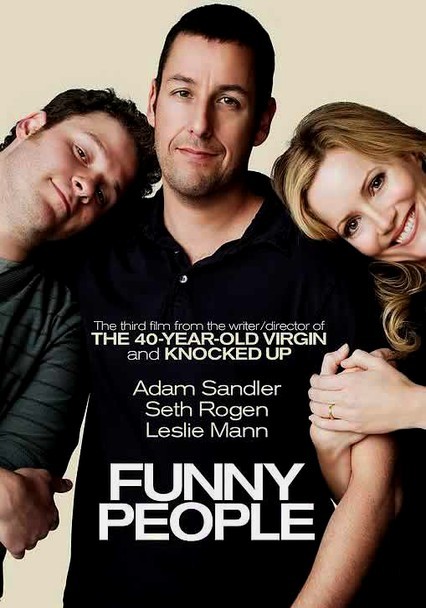 2009 UR 2h 26m Blu-ray / DVD
Famous and wealthy funnyman George Simmons doesn't give much thought to how he treats people until a doctor delivers stunning health news, forcing George to reevaluate his priorities -- with a little help from aspiring stand-up comic Ira.

Parents need to know that director Judd Apatow's latest comedy is loaded with the strong language (from "f--k" to "p---y" and then some), adult behavior, and sexualized material (including lots of penis jokes and one scene with naked breasts) you'd expect from the man behind Knocked Up and The 40-Year-Old Virgin. But it's also an honest, sincere drama about the challenges of modern life. Look past the crude stuff, and you'll see that this is actually a serious, heartfelt film masquerading as a light comedy.

One scene of inept (though enthusiastic) scuffling between two people who clearly don't know how to fight. It's played for comedic effect, but some of the slapping gets pretty serious.

Despite its crude humor, the movie's messages are actually moving and worthwhile -- about the importance of ethics, the nature and challenge of success, and the way that we often turn pain into laughter even though it doesn't complelety eliminate the underlying problem. This isn't a movie about people making jokes -- it's about people making art.