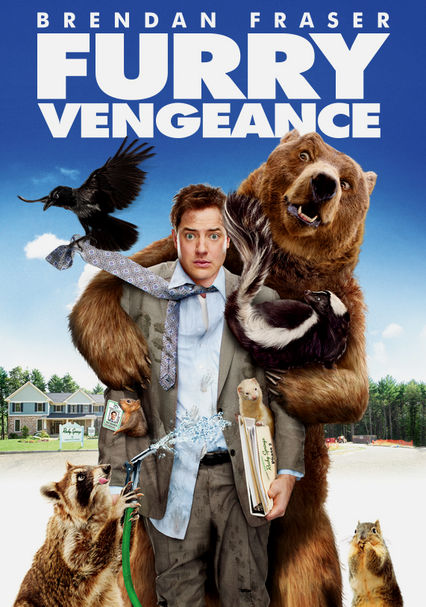 2010 PG 1h 31m Blu-ray / DVD
Furry Vengeance is a live action family comedy in which an ambitious young real estate developer, Dan Sanders, faces off with a band of angry animals when his new housing subdivision pushes too far into a pristine part of the wilderness.

Parents need to know that this family comedy is filled with animal jokes, pratfalls, and over-the-top sight gags, many of which involve animals provoking Brendan Fraser's character. Most of the violence is limited to skunk spray, animal pee, and bee-sting reactions, as well as the protagonist dad falling and hurting himself in every fashion imaginable. Apple dominates the product placements, with a Macbook, iPhone, or iPod visible in several scenes throughout the film. There's no sexuality outside of mild flirting, a quick kiss, and a couple of hugs -- nothing even remotely inappropriate for a PG movie. The messages of the movie are positive -- people shouldn't sacrifice their beliefs for work, and communities should take care of the animals in their midst -- but they're also secondary to the cartoonish "vengeance" the animals impart.

Mild flirting, hand-holding, and one kiss between teenagers. Dan and Tammy hug and kiss.

Most of the violence is just lots and lots of pratfalls. Dan is pretty much terrorized by the forest animals. Dan is sprayed -- three times -- by skunks; falls off a second story; lands straight on his groin; is followed by a bear; is urinated on by a raccoon; has a horrible allergic reaction to bees; etc. Neal Lyman is also chased and threatened by forest animals. Animals are rounded up, shot with tranquilizers, and caged.

The movie's messages include the idea that parents need to make sure that their work doesn't conflict with their personal sense of morality and ethics. Neil Lyman's attitude toward the environment proves caring for the environment is one thing in name and another in practice. Everyone should take animals' lives and habitats seriously.

The product placements include an Apple Macbook, iPod, iPhone, and Amazon's Kindle.

An adult man smokes a cigar.