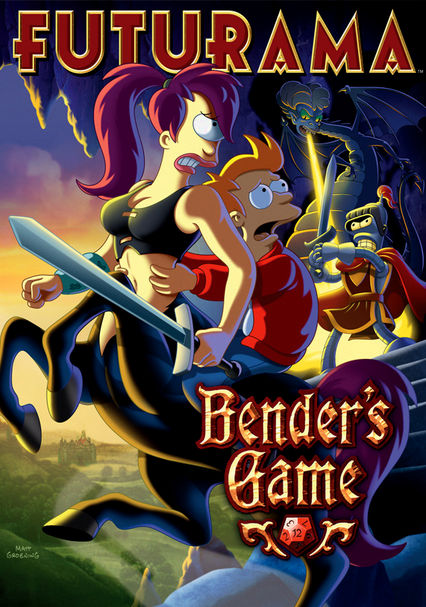 2008 NR 1h 30m Blu-ray / DVD
When doctors can't get through to Bender, they order a robotomy. Meanwhile, the Professor, Leela and Fry wind up with Bender in his imaginary world of Dungeons and Dragons, trapped in a fantastical land where anything can happen -- and does.

Parents need to know that teens who like the television show Futurama are going to want to see this DVD. It's not for sensitive viewers, or those who get grossed out easily. One character slaps her sons frequently, there's a rather gruesome dragon-slaying scene, and the Dark Matter that the characters in the movie are chasing for fuel is actually poop from creatures called nibblers -- you get the idea. Zany, wacky, sometimes violent, often funny mature cartoon action.

A nymph with nymphomaniac tendencies appears in the alternate universe. Scantily clad, she kisses Dr. Farnsworth and then Leela while Bender watches in a creepy way. Mom and Farnsworth have a romantic history with one another that is reprised.

Mom slaps her sons mercilessly and frequently. The sons smack and gouge each other. Spaceships blast one another. Kill-bots fire a lot of ammunition at their intended targets and each other. Leela can't control her violent urges, which becomes a theme in the movie. Also, a dragon-slaying scene at the end of the movie is pretty gross and the beheadings and stabbings are gory.

Mom is brutal with her sons, calling them names like "ass-brain" and "milk-sucking leeches." Occasional use of the words "hell," "damn," and "ass."

Don't look for role modeling here. Fry tries to help his friends, but Leela is volatile, Bender is mentally unstable, and Dr. Farnsworth is focused on his mission. The cast is diverse, but some robots who appear to be of African descent have stereotypical voices.

A mention of Google ("Google the hell out of that map") and Mombil, a spoof of Mobil Oil.

Bender is constantly imbibing. Whether it be beer, grog, or wine, he chugs it down throughout the show. Trippy scenes have hallucinogenic implications.