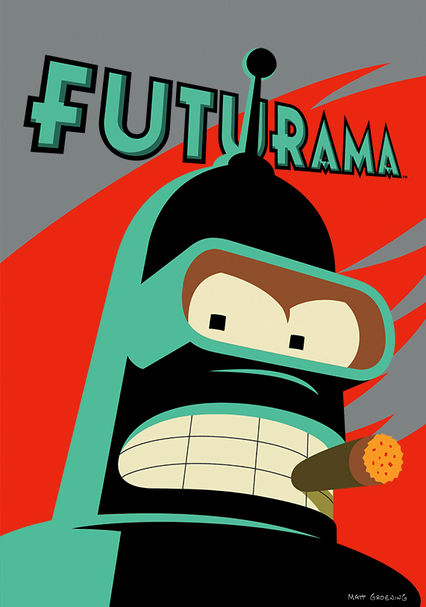 1999 NR 7 seasons
Pizza boy Philip J. Fry awakens in the 31st century after 1,000 years of cryogenic preservation in this animated series. After he gets a job at an interplanetary delivery service, Fry embarks on ridiculous escapades to make sense of his predicament.

Follows the adventures of Philip J. Fry, a 20th-century boy who falls into a cryogenic freezing tank and emerges from his suspended state 1,000 years in the future. Fry lands a job as a delivery boy, where he meets a host of quirky characters.

Heavy on satire and wit, this offbeat animated sitcom follows Fry -- a 20th-century guy 1,000 years in the future -- as he and his co-workers at Planet Express jet to all five quadrants of the universe, risking lives as they deliver packages.

In this out-of-this-world collection of episodes from creator Matt Groening's cult animated hit, the crew reverts to adolescence, Bender lands a role on a children's television series, and aliens harvest Fry's nose as an aphrodisiac.

After an absence of nearly seven years, the animated sitcom set 1,000 years in the future returns for a new season. In this collection, the Planet Express crew takes on subjects as varied as gay marriage, iPhones, creationism and The Da Vinci Code.

Bender impregnates a soda machine, the end of the world is nigh, the gang plots a casino heist and there's a horrific sausage-making accident in this collection of episodes from creator Matt Groening's bizarre and brilliant animated sci-fi comedy.

Parents need to know that because this series' content can be unpredictable, it's not meant for younger kids. The language can be crass, there are allusions to sex, characters drink and make drug references, and there is some cartoon violence. In general, characters don't cross the line when it comes to disrespecting each other, which would put the show into a more menacing sci-fi genre. Instead, this is a successful comedy that keeps you wanting more.

Unpredictable references; not for young kids.

Some cartoon violence, but nothing torturous.

Very unpredictable. Bender in particular has a potty mouth.

Some characters are lewd and bizarre. Again, the show is unpredictable. Very diverse society with strong female characters.

Bender needs to consume alcohol in order to function, so he's a steady drinker, though not having alcohol actually makes him drunk. Robots ¿ go figure.