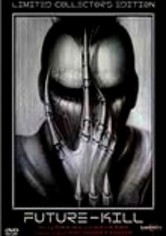 1985 R 1h 30m DVD
Prankster fraternity brothers become drawn into a deadly game in this postapocalyptic thriller that reunites Edwin Neal and Marilyn Burns, stars of The Texas Chainsaw Massacre. Protesters dress up like mutants and roam the city as a visible symbol of the effects of nuclear fallout -- and the frat boys plan to kidnap one of them. But the plot goes awry, and the pranksters find themselves in a vicious battle with a bona fide band of crazed mutants.