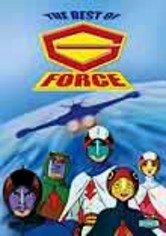 1987 NR 2h 30m DVD
When Earth is under attack, it's G-Force to the rescue in this animated sci-fi saga as a team of five young superheroes -- Ace Goodhart, Dirk Daring, Agatha June, Pee-Wee and Hooty -- battle to protect the planet from alien baddies. Follow their action-packed adventures as they fight off extraterrestrial invaders such as Galactor and Computor in this collection of seven previously unreleased episodes.