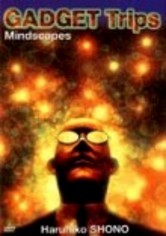 1995 NR 1h 19m DVD
Visionary artist Haruhiko Shono directs this trippy computer-animated film about the Sensorama, a futuristic electromagnetic radiation device that causes its victims to experience an assortment of mind-bending hallucinations. As tensions between fascist entities the Empire and the Republic build, they each use the weapon to throw enemy soldiers -- and the film's viewers -- into a surreal visual chaos of swirling liquids, lights and more.