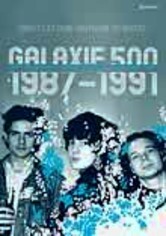 2004 NR 2 discs
Prepare to rock out with this compilation of extensive live performance footage, television appearances and music videos of alternative Boston rockers Galaxie 500, who specialized in moody rock dirges in the late 1980s. Included are performances at the Middle East in Cambridge, Mass. (featuring previously unreleased material "Back in Your Life" and "Buzz in My Head"), the Kennel Club in San Francisco and Club Lingerie in Hollywood.