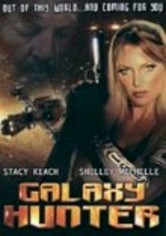 2004 NR 1h 26m DVD
Ginger (Shelley Michelle), otherwise known as Agent 3V51, is under orders to hunt down an extraterrestrial drug kingpin known as Zidian, who's abducted one of Ginger's colleagues. But she can't go it alone, so she recruits a handful of the best female spies in her organization to help her infiltrate Zidian's lair. Once there, however, Ginger discovers that she's far more invested in this whole enterprise than she'd first realized.