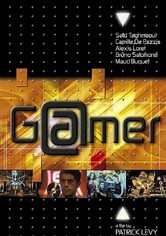 2001 NR 1h 32m DVD
Following an eight-month prison sentence for a botched burglary, small-time criminal and big-time gamer Tony (Said Taghmaoui, The Kite Runner) emerges from his prison cell with a concept for a sensational new video game. But when he entrusts his idea to the wrong person, Tony's forced to band together with some of his underground friends to create a different kind of game that will help him settle the score.