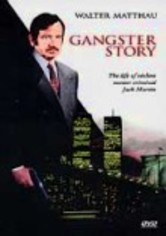 1959 NR 1h 10m DVD
With this crime drama, Walter Matthau makes his directorial debut and stars as aspiring mob boss Jack Martin. After running afoul of mobster Earl Dawson (Bruce MacFarlane), Jack teams up with him to pull off a series of bank robberies and one incredible final heist. Jack hopes to retire to Mexico with his girlfriend, Carol (Carol Grace), after this last job, but Dawson has other plans in store for him.