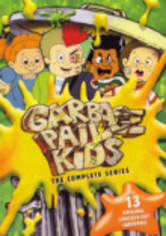 1989 NR 2 discs
Based on the popular 1980s trading cards, the never-aired animated series "Garbage Pail Kids" follows the gross-out adventures of five seemingly normal kids who have the weird ability to "trash" themselves into alternate superhero identities. Join Elliot Mess, Clogged Duane, Patty Putty, Split Kit and Terry Cloth as they fight injustice in and out of the trash heap. This collection contains all 13 episodes from the cartoon show.