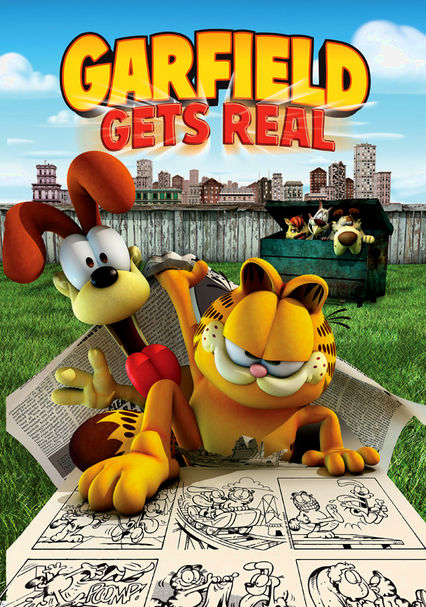 2007 NR 1h 10m DVD
Garfield jumps out of his comic strip and attempts to live life as a normal cat in the "real world." But when the real world doesn't turn out to be all that glamorous, Garfield has to return to his comic-strip home before getting trapped forever.

Parents need to know that Garfield Gets Real is a 2007 computer-animated feature. Despite brief instances of juvenile humor (a whoopee cushion is used, a dog is seen drinking out of a toilet bowl, a bear blows his nose and sends the tissue landing on a woman's face), this movie is best for younger children and fans of the Garfield comic strip. There also is some minor name-calling ("butt," "losers"), as well as some peril when Garfield, Odie, and their new friend Shecky hang upside down from a chandelier while the building they're in begins to burn down. Still, this is a mostly tame and fairly enjoyable movie starring the comic-strip world's most beloved cat.

A cartoon cat kicks a cartoon dog in the rear end. Garfield, Odie, and their new friend Schecky hang upside down from a chandelier as a building catches fire and begins to burn down.

A character calls Garfield a "butt." Garfield calls two characters who seek to take over his prized spot on the comic-strip page "losers."

Characters work together to help Garfield and Odie go back to the land of comic strips.