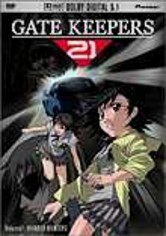 2003 NR 2 discs
In 1969 Japan, a mysterious group of soldiers known only as the Invaders is using unconventional guerilla tactics in an attempt to slow Japan's recovery from WWII. As the Invaders plan a new attack, led by old foes Ghost Girl and the revived Kaiser Kikai, the obstacles are more difficult than they thought. Ayane tries to recruit a new member from her high school, who is willing to join until she discovers that the Invaders are human.