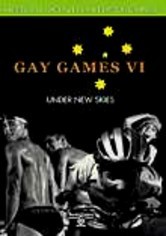 2003 NR 2 discs
The 2002 Gay Games in Sydney, Australia, are covered like never before in this scintillating two-disc set. Watch as athletes compete in the triathlon, powerlifting, touch rugby, basketball, cycling, dancing, squash, swimming and much more. Included are extensive interviews with the athletes, volunteers and other participants, as well as comprehensive sports footage. Singer K.D. Lang is also the subject of a rare media appearance.