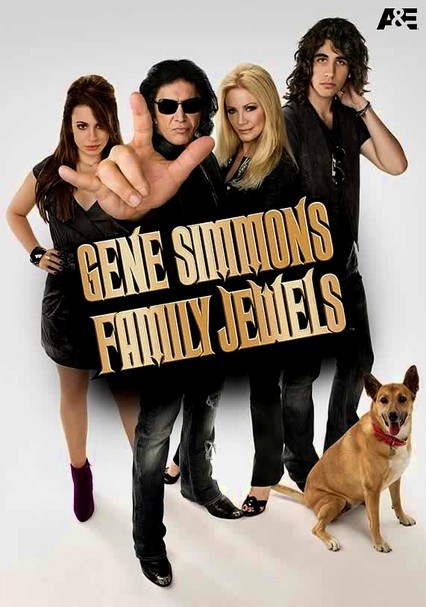 Thrusting out his tongue and in full makeup, Gene Simmons performs with his rock band KISS, but on his more dressed-down days, he's just another soccer dad. This reality series reveals a shockingly normal side of the notorious rocker.

Family man and Kiss front man Gene Simmons rocks the domestic arena once more in this sophomore season of the A&E reality series. Early episodes find thoughts of a new baby dancing in Shannon's head as Nick prepares for college. Other highlights include the Simmons's European vacation, visits from nutty Aunt Tracy, Sophie's burgeoning modeling career, twin face-lifts and a banner day at the Kentucky Derby.

In this third season of this A&E reality series. KISS front man Gene Simmons plays a gig in Las Vegas, takes his twin grandsons to Sea World, and helps Shannon and daughter Tracy exact revenge on a swindling salon -- by buying it for them.

Parents need to know that this "celebreality" show features party scenes with women in tight clothes who virtually fall over themselves to be noticed by legendary rock star Gene Simmons. Alcohol is prevalent, some mild cursing is common, and the show serves as evidence of our fame-obsessed culture. But the Simmons family members also clearly care deeply about one another, and both parents make efforts to communicate with their kids, acknowledge their concerns, and be involved in their lives. Watch for some relationship drama, including indications of infidelity and deception between Simmons and his partner in later episodes.

Scantily dressed women hang all over Gene whenever he goes in public. Innuendoes and suggestive comments are common in such scenes. Gene and partner Shannon Tweed (who have been together for 20+ years) have never married, in part because Simmons occasionally does more than flirt with other women.

"Hell," "tits," "suck," and "damn" are used infrequently. Anything stronger (which is fairly rare) is bleeped.

Despite the trappings of Simmons' rock star lifestyle, the show's underlying messages are about the importance of family and parental involvement.

Party scenes include lots of alcohol, and the action is so chaotic that it's hard to tell who's really of age and who isn't.