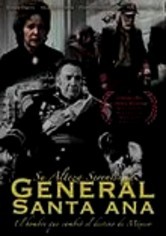 2004 NR 1h 52m DVD
This biopic tells the story of infamous Mexican president Antonio Lopez de Santa Anna. Set in 1876 during the last three days of the leader's life, the film paints a portrait of a gravely ill, but quite earnest Santa Anna (Alejandro Parodi) as he talks about the past -- including the 1847 war against the United States that cost his country half its land -- as well as what the future may bring for Mexico and its people.