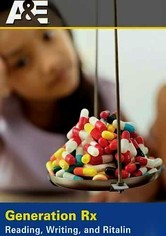 2008 NR 0h 50m DVD
Exploring both sides of a controversial issue, this A&E documentary asks whether Ritalin -- the tiny yellow pill prescribed to millions of kids with Attention Deficit Disorder -- is a miracle cure or merely a quick fix that does more harm than good. The drug's supporters and detractors weigh in on the sharp increase in Ritalin prescriptions since 1990 and debate its effectiveness in keeping youngsters focused at home and in the classroom.