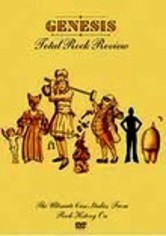 2003 NR 1h 1m DVD
Capturing Genesis playing in Europe and America, this video critique reviews the British group's legacy, from its progressive-rock roots with Peter Gabriel at the helm to its later years with Phil Collins in charge. Performance footage, interviews with band members, insights from rock journalists and clips of classics tunes such as "Turn It on Again" and "The Lamb Lies Down on Broadway" make this video essential viewing for Genesis fans.