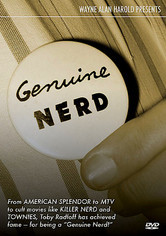 2006 NR 1h 11m DVD
Movie geek Toby Radloff -- whose first brush with notoriety came as a result of stints on MTV's "Week in Rock" -- is the subject of this engaging documentary. Radloff later added to his quasi fame with turns in camp classics Killer Nerd and Townies.