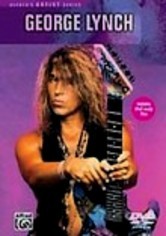 2008 NR 0h 45m DVD
Learn heavy metal guitar technique from one of the biggest names in rock, Dokken lead guitarist George Lynch, who reveals his secrets for tapping, string skipping, whammy bar effects and vibrato techniques, along with his signature riffs. Between lessons, cameras take viewers into the studio as Lynch puts the finishing touches on "Wicked Sensation," the debut album by his band Lynch Mob.