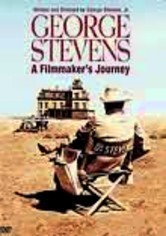 1985 NR 1h 51m DVD
Academy Award-winning director George Stevens, who helmed many thought-provoking films about World War II, is given a fitting and well-deserved tribute by his son, George Stevens Jr. Catch footage from several of Stevens's movies, featuring such Hollywood heavy-hitters as Fred Astaire, Montgomery Clift, James Dean and Douglas Fairbanks Jr., and discover how Stevens rose from cameraman to one of the most powerful figures in the industry.