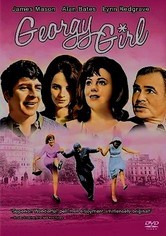 1966 NR 1h 39m DVD
Nominated for four Oscars, director Silvio Narizzano's cheeky comedy stars Lynn Redgrave as 22-year-old Georgy, a chubby but sassy virgin who finds herself with two men on her hands. It seems that her dad's amorous, middle-aged boss, James Leamington (James Mason), wants to make her his mistress; meanwhile, the father (Alan Bates) of her narcissistic roommate's illegitimate child falls in love with Georgy. What's a dithering girl to do?