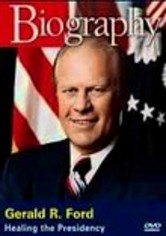 1997 NR 0h 50m DVD
Dubbed "the Accidental President" because he never sought the country's highest honor, Gerald R. Ford had the formidable task of restoring faith in the American presidency in the wake of Richard Nixon's resignation. Combining interviews with Ford's cabinet members and archival footage from his days in office, this episode of "Biography" reveals a man whose steady hand and crucial policy of open government helped reassure a doubtful nation.