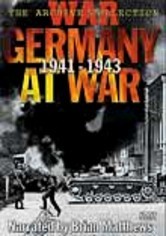 2006 NR 0h 50m DVD
In this provocative documentary series, black-and-white images culled from private archives and German newsreel footage replay the events of World War II as seen through the eyes of the German citizenry, which received most of its information through carefully orchestrated government propaganda. The second volume in the series presents material produced between 1941 through 1943, highlighting key battles and campaigns from the Axis perspective.