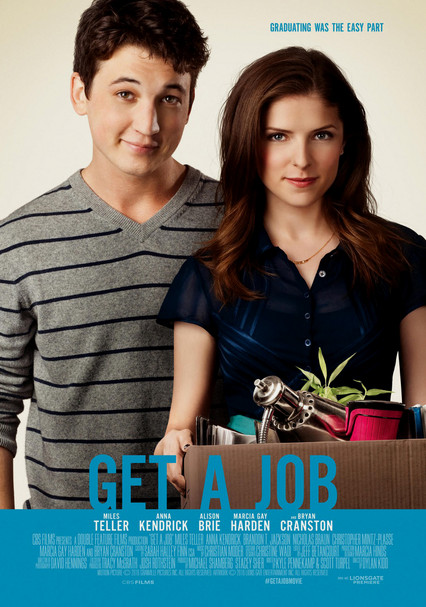 2016 R 1h 23m Blu-ray / DVD
Armed with fresh college degrees, a group of friends wades into the job market but are dismayed by the opportunities offered, ranging from lowly service jobs to bizarre tasks that only a desperate person would consider.

Parents need to know that Get a Job is a comedic look at recent college graduates (including characters played by popular actors Miles Teller and Anna Kendrick) struggling to get their careers going in entry-level corporate positions. While there's a message about staying true to yourself/your vision, the situations aren't quite realistic, so it's not something that young people should look to for realistic advice -- plus there's lots of drinking, pot-smoking, and sexual references, as well as some nudity (a topless dancer at a strip club, naked male rear end, etc.). There's also plenty of innuendo and sex/masturbation talk, and you can expect tons of colorful language, including "sh-t," "f-ck," "c-ck," "bitch," "p-ssy" and more.

A group of young men picks a fight with several security guards, leading to mayhem but no serious injuries.

Work hard, and you'll get ahead, but it's also important to stay true to your own vision of the best way to get things done; just because things have always been done a certain way isn't a reason to assume that's the best way.

Characters drink frequently when they're hanging out, at home, or at clubs. Also lots of pot: A big bong is a permanent fixture in the living room where several characters live, and a key plot point is how a straightlaced character starts to smoke weed. Another plotline has a character pulling a drug-fueled all-nighter at work to complete a project.