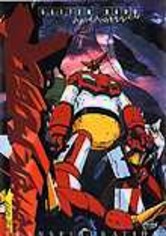 1998 NR 1h 15m DVD
The Getter Robos -- vehicles that combine to form a massive battle robot -- were created during the lunar wars in an effort to defend the Earth against the seemingly endless threat of alien invasion. But as the years passed, the weapons that once saved mankind were feared and destroyed. Now, annihilation again looms on the horizon, and old heroes and new must heed the call to battle as the war for Earth's survival begins anew!