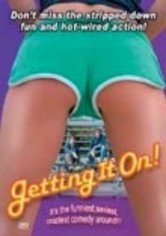 2004 R 1h 36m DVD
Teenage peeping tom Alex (Martin Yost) takes his obsession with sexy Sally (Heather Kennedy) to the next level when he starts a voyeuristic video production company in this racy comedy. With help from a buddy, Alex gets as much footage of Sally as possible, then turns his cameras on other unsuspecting victims. When the school principal threatens to ruin their fun, the maverick filmmakers decide their project could use a scandalous new scene.