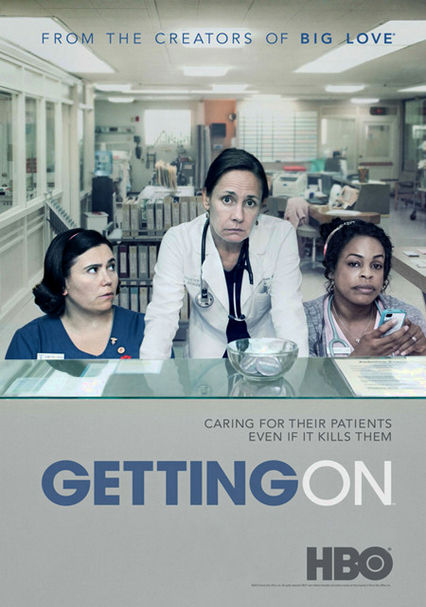 2013 TV-MA 2 seasons
This dark comedy chronicles the lives of caregivers -- nurses, doctors and orderlies -- on the geriatric wing of a rundown hospital. When not saving lives and emptying bedpans, the group deals with indifferent relatives and healthcare bureaucracy.

This dark comedy follows a group of doctors, nurses and other caregivers on the geriatric wing of a hospital that's seen better days. When not dealing with the day-to-day drama, the team also contends with a shaky American healthcare system.

In this season of the offbeat comedy -- which continues to needle the bureaucracy in America's health-care system -- Dr. James' research projects take over the ward, Didi pushes for a pay raise, and Patsy becomes a patient.

Parents need to know that, although Getting On is set in the slow-paced world of geriatric care, the show is pretty salty in terms of language, with unbleeped swearing ranging from "c--ksucker" to "f--k," in addition to slurs such as "coon" and "dyke." There's sexual content, too, with mostly clinical descriptions of sexual acts and, in at least one episode, simulated oral sex. Although there's minimal blood for a medical show, characters do tend to argue a lot, and some patients can be physically and verbally abusive to their caretakers. Social drinking to excess is discussed but never shown on-screen.

Characters talk about sex and describe sexual acts (although usually in a clinical manner). On one occasion, a blow job is simulated, but no actual nudity is shown.

Characters tend to argue a lot, sometimes with their superiors or underlings. Patients can be mildly violent (pushing, slapping, punching) with their caretakers. Blood is minimal.

The show as a whole doesn't paint a rosy picture of aging and elder care; people die, patients are treated like numbers, and loneliness is palpable. But thanks to an emerging friendship between coworkers, there's at least some sense of hope.